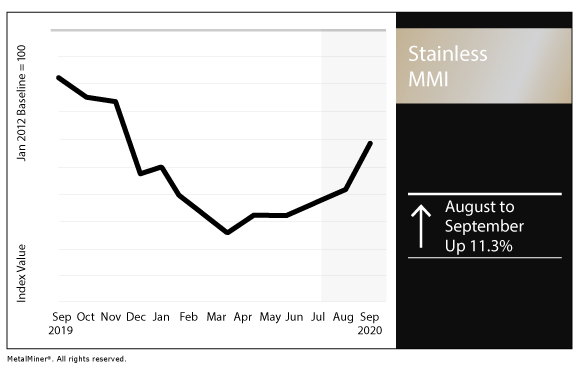 Upcoming negotiation on your stainless steel buy? Make sure you know how your service centers will negotiate with you.

Stainless alloy surcharges are rising for the fourth month in a row.

Over the past month, LME nickel prices increased approximately 12%, up to $15,442/mt by the end of August.

Import levels reported match the expansionary track the U.S. has seen in the past four months.

August ISM PMI data came in at 56%, up 1.8 percentage points from July. Moreover, the ISM Manufacturing New Orders index came in at 67.6% in August compared to 61.5% in July.

Besides consumer goods, the automotive industry is another major consumer of stainless steel.

As the U.S. presidential election approaches, both candidates have expressed their desire to boost the U.S. auto industry to create jobs.

A few particular differences could impact the price of stainless steel.

Tariffs and the trade war with China could lead to a price increase. On the other hand, the shift from combustion engine to battery-electric propulsion could be incentivized. In the latter case, the demand for nickel could not only increase due to stainless steel demand but also due to the increasing demand for nickel to be used in electric vehicle (EV) batteries.

Some EV manufacturers believe nickel demand could increase so much that they are reaching out directly to nickel producers.

For example, Tesla is in discussion with Giga Metals, a Canadian producer, to develop a large nickel mine project that could provide Tesla with low-carbon nickel for its batteries.

According to Benchmark Mineral Intelligence, nickel demand for batteries could rise to 1.4 million metric tons by 2030, or 30% of total nickel demand. Should that occur, that would represent a 30% demand increase from the current demand is about 139,000 metric tons.

Do you know the five best practices of sourcing metals including stainless steel?